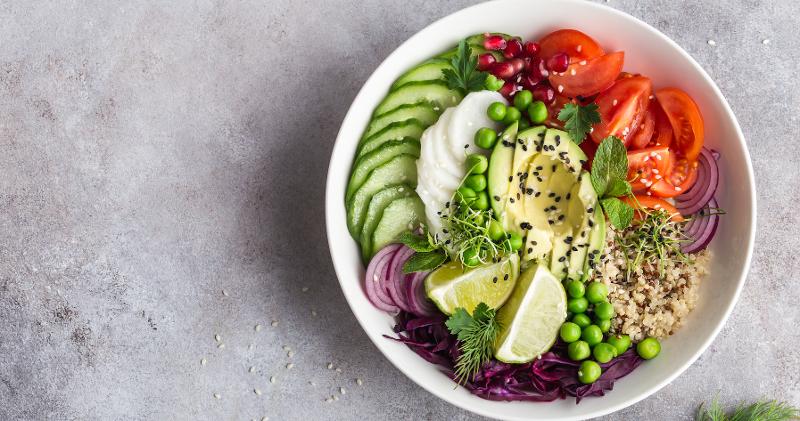 Reducing carbon emissions has become a big area of focus in foodservice, shining a spotlight on plant-based dishes. / Photo: Shutterstock

Top Western food and beverage companies are missing the mark on their aims to reduce carbon emissions, according to new research published by consulting group AlixPartners.

The research suggests that the Western food and beverage companies with the largest revenues are likely to fall 34% short of an industry-wide carbon-reduction goal set by the Science Based Target initiative, a collaborative effort from organizations including the World Wildlife Fund and the United Nations Global Compact.

This goal to reduce global carbon emissions by 37.6% from 2019 to 2030 is what the initiative says would be required by the industry to ensure Earth’s temperature doesn’t rise more than 1.5 degrees Celsius.

Through the process, it found that current carbon-emissions commitments are too low to meet the global industry target.

“AlixPartners estimates that, even if all these commitments are met, the companies will still have only reduced their carbon emissions by 29% between 2019 and 2030,” the firm said in a press release.

The research also implies that even reaching that 29% is unlikely, as food and beverage executives lack confidence in their ability to reduce carbon emissions. Their survey found that only 49% of suppliers, 36% of manufacturers and 31% of retailers said they were very confident in meeting their own carbon emissions reduction goals.

“Manufacturers, suppliers and retailers alike need to look across their entire value chains to understand and exert influence all the way back to the start of those chains, as well as downstream towards the end-consumer, if they are to make truly exceptional progress on this front,” said Randy Burt, managing director in the consumer products practice at AlixPartners.

To reach the goal of 38%, researchers urged for quick action. “If the industry is going to meet its carbon-reduction goals by 2030, time is of the essence,” said Andy Searle, a managing director in the consumer products practice at AlixPartners. “Consumer-products companies need to determine what they need to do and who within their business needs to act within the next 12 months and then within the next 24 months.”

Reducing carbon emissions has become a major area of focus in foodservice as consumers, legislators and other stakeholders call for eco-friendlier operations.

Aramark said this month that it will substantially cut greenhouse gas emissions related to the food it serves, pledging to reduce those emissions by a quarter by 2030. Earlier this year, the company began calling out items with a lower carbon footprint on menus at 10 universities, an initiative it will soon bring to more schools as well as eateries in healthcare and business and industry.

Similarly, the University of Massachusetts in April began labeling menu items with ratings that correspond to their carbon footprints. This change came after more than three-fourths of students who responded to a UMass Dining team survey said that reducing their carbon footprint was important to them.

Want breaking news at your fingertips?

Click here or text FSD to (877) 281-7554 to receive text alerts from FoodService Director and get the news and insights that matter to your operation.

Login if you have purchased

Unlock this article and gain permanent access to read it.
Unlock Now

Source The UK will become the first nation to produce a complete map of its blue carbon stores, thanks to...

Source The UK will become the first nation to produce a full map of its blue carbon stores. ed by...

Source 12 Jul 2022by Charlotte CullinanTailor-made and yachting specialist Pelorus has launched a portfolio of carbon removal projects, which customers can...

Exxon Wants a Higher Carbon Tax: This Fund Would Benefit